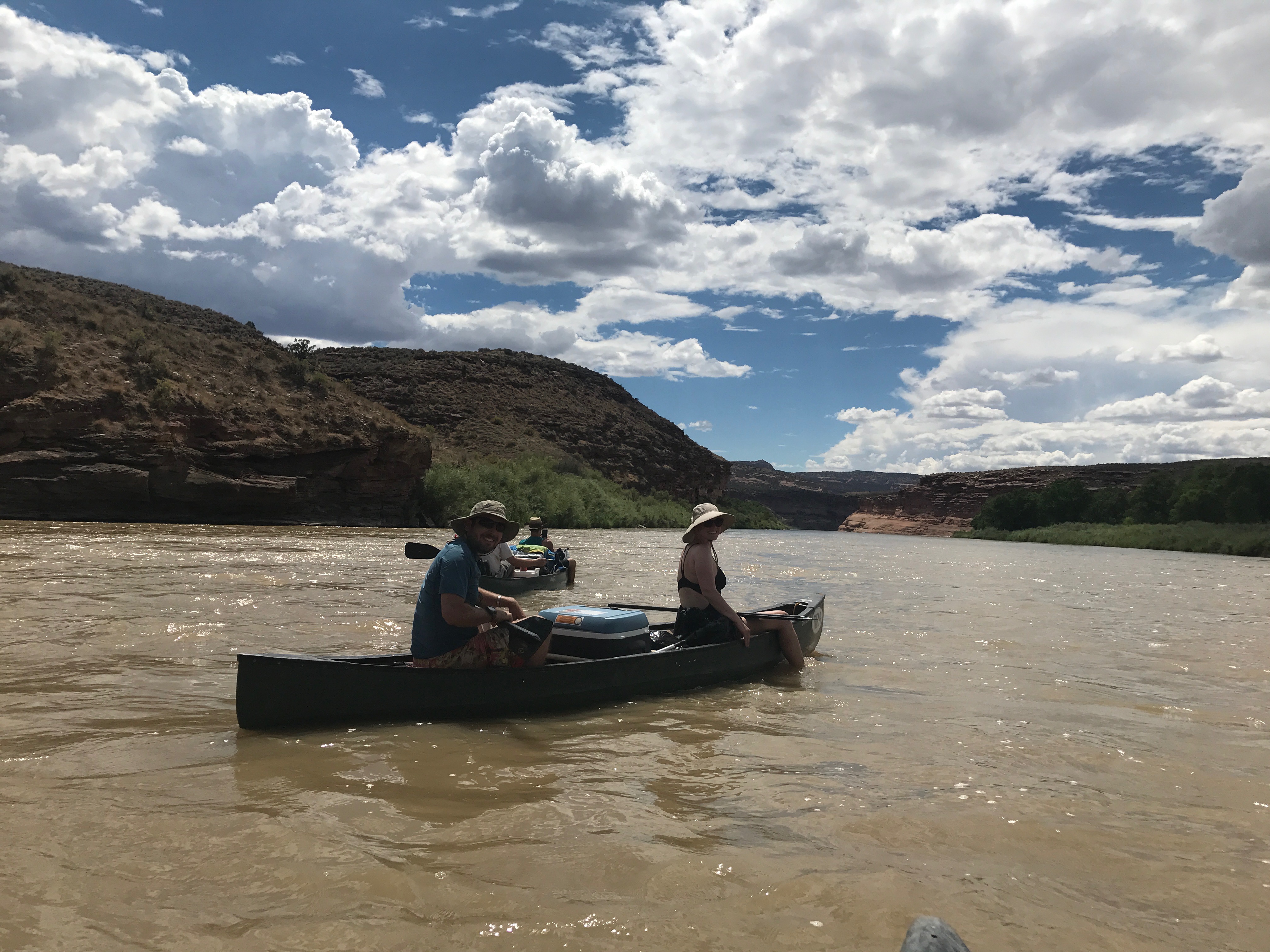 A few weeks ago, Erika and I joined some friends on the Colorado River for a repeat of a trip we took last year.

I got all my gear sorted out on Thursday afternoon/evening, then drove out to Fruita (our put-in point) on Friday morning. By noon we were all loaded up in our canoes and ready to hit the water.

This year’s highlight was probably the felon we ran into who claimed to be on the run. Seriously. Right when we started, we saw someone putting in on the other side of the river in a yellow kayak. Not too long later he caught up with us, and asked to borrow a phone. His story was confusing and rambling, but he claimed to be on the run from Federal Marshals, and was taking one last river trip before he was put away for 20+ years on a felony “paleolithic” offense, which apparently involved finding and trying to sell a dinosaur bone on federal property. The guy was wearing jeans and runners, and had nothing with him. Our guess is that he stole the kayak and was just making a run for it.

Other than our kayaking-felon, we were treated to the same beautiful cliffs and landscapes as we were last year. Some fun mini-rapids and lots of hanging out in chairs in the river, drinking beers. We also briefly saw some river otters on the last day which was a fun treat.

The first night’s campsite again turned out to be a rough one, even though we tried a very different one this time. It was super muddy to get in there, and then was again a total mosquito party. We found a spot inland a bit where we could set up a kitchen and hang out to avoid the mosquitos, but then it rained all evening, which made for a pretty muddy and dreary time. The next morning we went on a bit of a hike up into the valley/hills, checked out the scenery, then headed off for the day.

Day 2 (the only full day on the river) was a really lazy one, because we didn’t have that much distance to cover. We had a few nice long breaks, including a shot at some fishing and running some rapids in life vests (just laying back and floating them directly in the river). That night we stopped at Black Rocks 3 campsite, which was glorious. We had a beach to ourselves with soft sand, no mosquitos, and ended up with a beautiful clear sky. We lay around and watched the stars, admired the Milky Way, and generally just enjoyed the evening.

Since we had a schedule to keep on Day 3, we were up and at it in the morning, and got moving. We got buzzed by a plane while we were packing up (figure-8s in the sky!), then hit the river. When we got to the boat ramp, our ride was already there so we took out, packed up, and rolled back to Fruita. From there it was a matter of loading everything up, then making the 4 hour drive back to Denver so that we could unpack and clean, organize etc. Another great trip.