A tug of war is often used as an illustration of the Ringelmann effect. As more people are involved in a task, their average performance decreases, each participant tending to feel that their own effort is not critical.

The Ringelmann effect is the tendency for individual members of a group to become increasingly less productive as the size of their group increases. This effect, discovered by French agricultural engineer Maximilien Ringelmann (1861–1931), illustrates the inverse relationship that exists between the size of a group and the magnitude of group members’ individual contribution to the completion of a task. While studying the relationship between process loss (i.e., reductions in performance effectiveness or efficiency) and group productivity, Ringelmann (1913) found that having group members work together on a task (e.g., pulling a rope) actually results in significantly less effort than when individual members are acting alone. Ringelmann discovered that as more and more people are added to a group, the group often becomes increasingly inefficient, ultimately violating the notion that group effort and team participation reliably leads to increased effort on behalf of the members.

According to Ringelmann (1913), groups fail to reach their full potential because various interpersonal processes detract from the group’s overall proficiency. Namely, two distinct processes have been identified as potential sources for the reduced productivity of groups: loss of motivation, and coordination problems.

Motivation loss, or social loafing as it is otherwise known, is the reduction of exerted individual effort observed when people work in groups compared to when they work alone (Williams, Harkin, & Latané, 1981). According to Ringelmann (1913), group members tend to rely on their co-workers or co-members to furnish the desired effort required for a communal task. Although group members generally believe that they are contributing at maximum potential when asked, evidence has indicated that members exhibit loafing even when they are unaware that they are doing so (Karau & Williams, 1993). In order to reduce the level of social loafing in a group, several “solutions” have appeared in the literature on social facilitation. A selection of these solutions is as follows: 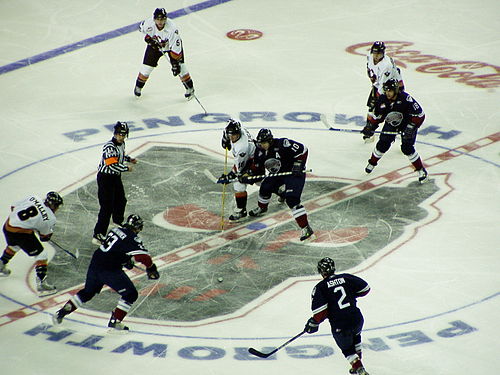 Ice hockey is an example of an activity where coordination is critical for efficient performance.

When individuals come together in groups to perform a task, their performance depends on their individual resources (e.g., talents, skills, effort) and the various interpersonal processes at work within the group. Even if group members possess the abilities and expertise required to complete an assigned task, they may fail to coordinate their efforts in a productive way. For example, hockey fans may feel that a particular team has the best chances of winning simply because the team is composed of all-star players. However, in reality, if the members of the team are not able to effectively synchronize their actions during game play, the team’s overall performance will likely suffer. According to Steiner (1972), coordination problems between group members are a function of the demands of the tasks to be performed. If a task is unitary (i.e., cannot be broken into subtasks for individual members), requires output maximization to be successful (i.e., a high rate of production quantity), and requires interdependence among members to yield a group product, the potential performance of a group relies on members’ abilities to coordinate with one another.

Subsequent research has aided the further development of the Ringelmann effect theory. Most notably, Ingham, Levinger, Graves, and Peckham (1974) discovered that group members continue to exhibit reductions in rope-pulling force even after being placed in pseudo-groups (i.e., groups composed of confederates and one, true participant). In their study, Ingham et al. (1974) directed confederates to pretend to pull on a rope by faking exertion, suggesting to the real participant that all members were working together. What proves of interest here is that because there was virtually no coordination between the participant and the confederates (they were not physically taking part in the actions), poor communication cannot account for the decrease in effort. Therefore, Ingham et al. (1974) support the assertion that motivational losses largely determine an individual’s decline in performance when acting as a member of a group.

In addition, research has shown that participants who have previous experience in a team sport may not show the Ringelmann effect.