The Codeless Code: Case 154 A Bridge To Nowhere

A bridge builder was completing his inspection
of Zjing’s Bridge when he spied master Kaimu standing nearby. 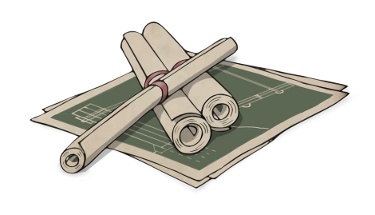 The builder said to Kaimu: “I have heard your monks
speak of themselves as ‘software engineers.’ As a true
engineer I find such talk absurd…

“In my profession we analyze all aspects of our task
before the first plank is cut.
When our blueprints are done I can tell you exactly how much
lumber we will need, how many nails and how much rope, how
much weight the bridge will bear, and the very day it
will be completed…

“Your monks do no such things. They churn out code before
your customer has finished describing what is desired. They
improvise, reconsider, redesign, and rewrite a half-dozen times
before delivery, and what they produce invariably crashes or
proves vulnerable to attack. If I were to work in such a
fashion, no one would dare set foot upon this bridge!”

Kaimu bowed and said: “There is much our monks could learn
from you.”

The master then called out to three senior monks, to attend
the example of the bridge builder, and to hear of the
discipline of a true engineer.

After the builder had repeated his argument, the first monk
asked: “When a bridge is half-finished and the client then
commands it to be twice as wide and two miles downstream,
how is this accomplished?”

The builder said: “We simply do not allow such unreasonable changes.”

The second monk asked: “When you learn upon completion that
your industry has moved from wood to stone and is now only
training masons, how do you refashion the many structures in
your care?”

The builder said: “We simply do not perform such unnecessary maintenance.”

The third monk asked: “When the force of gravity suddenly
changes direction, or the gods decree that wood shall become
dust and rope shall weigh as much as lead, how do you
keep travellers from plunging into the abyss?”

The builder said: “We simply do not plan for such absurd possibilities.”

When they had reached the other side, Kaimu asked
the first monk: “What have you learned from the bridge-builder?”

The first monk said: “The determination of a true engineer
is an enviable thing. But if we were to work in such an
inflexible fashion, the Emperor would surely drown us
in our own Waterfalls.”

Kaimu asked the second monk: “What have you learned from the bridge-builder?”

The second monk said: “The frugality of a true engineer is
an enviable thing. But if we were to cling so hard to
yesterday’s technology, the Web would not exist for another
thousand years.”

Kaimu asked the third monk: “What have you learned from the bridge-builder?”

The third monk said: “The predictability of a true
engineer’s world is an enviable thing. But ours is a world
always in flux, where the laws of physics change weekly. If
we did not quickly adapt to the unforeseen, the only
forseeable event would be our own destruction.”

The first monk asked: “Master… what has the bridge-builder
learned from us?”

Said Kaimu: “Nothing yet. But when I touch a lit candle to
the oil I sprinkled from my lantern during our crossing, he
will learn the reason to plan for the absurd, the virtue of
rebuilding in stone, and the wisdom of not insulting your
customers.”