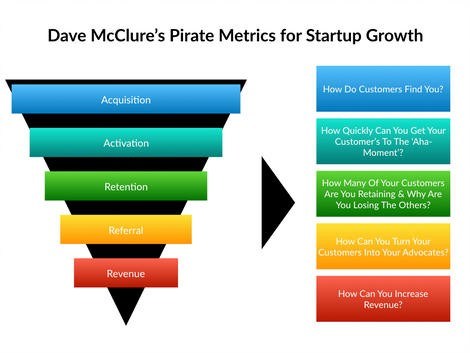 I worked as a full stack engineer/developer for many years before going into more leadership type positions, where an understanding of the business itself became much more important than specific product experiences, features, or codebases. Along that journey I’ve needed to learn a lot of acronyms and concepts that aren’t a part of pure engineering, and would like to summarize some of the more fundamental pieces below in case they’re useful for others making a similar transition.

A lot of this is likely to come across as very basic for anyone who’s spent time thinking about these sorts of things — that’s entirely intentional. Think of it as a primer for someone who’s never needed to look outside of pure code/implementation, or care about the business side of things. I would also add a huge caveat that in my experience companies often define the specifics of these concepts differently when you dig into exactly what they’re referring to, so it’s very important to verify exactly how your company is using them.

Net vs Gross: Mostly used in the context of revenue or income. Basically Gross is the overall/total you take in, while Net is Gross minus “deductions”. Exactly what those deductions are is where things can get complicated. For personal income, deductions might include taxes, Social Security, Medicare, etc. For companies, they might include refunds, returns, and specific expenses involved in producing/selling a product. This page is a good explainer (and talks about some of the vagueness in these terms).

Conversion rate: This is an extremely common term in the software industry, and just refers to how many times one event happens after another. The same concept is applied to all kinds of usage metrics, from clickthrough rates (the conversion rate of people who view something, vs those who click it) to signup conversions (people who visit a site, vs those who complete the signup process) to purchases of products (which are a “conversion” from viewing a product, to purchasing it). To calculate a conversion rate, you just divide the number of “later” events by the number of “earlier” ones and convert to a percentage. So if 5,000 people view a link, and 1,000 of them click on it, that’s a 20% conversion rate — (1000 / 5000) * 100. Conversion rates are useful at all levels of granularity, so they could be very “macro”, looking at perhaps a conversion rate from visitors to the homepage of a website, to completely verified signups, or they could be much more specific; looking only at the conversion rate between those who enter their email to sign up, and those who actually receive and open that email. Understanding conversion rates and those levels of granularity are really powerful when combined with the next concept —

Conversion funnels: Everything is a funnel. Conversion funnels take the idea of conversion rates and apply them throughout any series of events, documenting a series of conversion rates from event to event. It’s called a funnel because at each event, there are likely fewer observed instances of whatever you’re measuring than there were at the previous event (so when you visualize the funnel, it gets narrower further “down” the funnel). Conversion funnels can be applied to all sorts of things — hiring processes, usage in a UX flow throughout a product, organizing sequential contributions to a celebration, etc. Once you start thinking about conversion funnels, you see them all over the place. “Pirate Metrics” are a fun version of the classic implementation of a conversion funnel for marketing/sales/growth (don’t get too caught up on the specific events/stages in the funnel though). Understanding your funnels is important because it gives you a way to numerically analyze the path towards some desired outcome and identify bottlenecks or inefficiencies in that path, then remove/reduce them. When people refer to “top of funnel” they are talking about the very beginning of the flow; so the number of initial visits to a website, or the number of applicants to a hiring process. Conversion rates are measured through each step of the funnel, sometimes “flipped” to show a “drop off rate” between events. You might also look at an overall conversion rate which compares “top of funnel” to “end/bottom of funnel”.

Lifetime Value (LTV, sometimes CLTV for Customer): LTV refers to how much revenue you expect to make on average from a paying customer. So if you sell a single product for $100, and everyone buys one of them, then your LTV will be $100. Things get a lot more complicated when you’re selling subscription products/services, at different rates, over different periods. In that context, understanding the average purchase price and the average duration of a subscription allow you to come up with an LTV. If you sell an average $10/month subscription and most customers stick around for 18 months, then your LTV is $180. Note that if you’re also selling annual subscriptions then you might need to convert those numbers by dividing by 12 to make them monthly. LTV can be quite hard to come up with depending on the frequency of purchases, how “spiky” purchases are, and a number of other factors, but is very important because it’s a key value in figuring out how much money your business can spend to acquire customers (see below), without being in the red. This article has an extensive breakdown on the math.

Customer Acquisition Cost (CAC, sometimes SAC for Subscriber): For most businesses, you’ll be spending money to acquire customers. That might be through printed newspaper advertising or search engine marketing or banner ads on industry websites, but you’ll likely be paying to get people to check out your product and hopefully buy it/sign up for something. CAC just refers to how much it costs on average for you to get a single paying customer. So this effectively becomes a conversion rate (see above) between “dollars spent on marketing” and “number of people who become paying customers”. If you spend $2,000 on search engine marketing, and get 15 paying customers from that campaign, then your CAC is 2000 / 15 = $133. This is another really important number to know and understand because if it exceeds your LTV (above), then you’re spending more money to acquire customers than you’re making from them. CAC normally doesn’t even take into account all your other operational expenses, so the picture is even worse if you include those. Keep in mind that you can also look at a “blended CAC” which includes all marketing costs, or more specific ones for different sales channels (where you might find that some are profitable, while others are just wasting money).

Monthly Recurring Revenue (MRR, also ARR for Annually): These figures help you understand how much of your revenue is predictable for a period (Annual or Monthly) and are based on reducing subscriptions to the same time period. To get it just multiply your averaged monthly subscription billings by your number of customers. Baremetrics has a pretty good explainer on MRR and related concepts around expansion, contraction, etc.

Retention and Churn: I’ve put these two together because they’re often used in similar but “opposite” ways. They are mostly used with subscribers/customers, or revenue. Very roughly speaking, Retention measures how much of your revenue (or how many of your customers) is sticking around from period to period, while Churn refers to how much of it is disappearing. They are normally both shown in percentages, so they should add up to 100%. Let’s imagine you have a monthly subscription product, and you get 1,000 subscribers. When it comes time to renew those subscriptions only 800 of your subscribers successfully renew. You have a retention rate of 80% and a monthly churn rate of 20% (this is very bad!). Where things get trickier here is that you presumably get new subscribers constantly, so you need to be able to look at cohorts (grouped by month perhaps), or something like “revenue retention” where rather than look at subscriber counts (especially if they reflect different subscription dollar values), you look at the amount of revenue that their subscriptions represent, which can help paint a more complete picture (especially if you’ve got upsells, downgrades, and other things in the mix). Churn is an extremely complex topic, and is often quite difficult to understand. Customers could be leaving your product for all manner of reasons, some of which are entirely out of your control. Generally speaking you want to keep churn as low as possible though, because those are customers you’ve likely already spent money to acquire (CAC), and should theoretically be much easier (and cheaper) to keep happy than going out and acquiring new customers. A high churn rate is also normally a clear indicator of a lack of product market fit/lack of customer satisfaction with your product. This is a good guide to different types of churn.

What other useful metrics or acronyms have you come across in “engineering adjacent” vernacular?