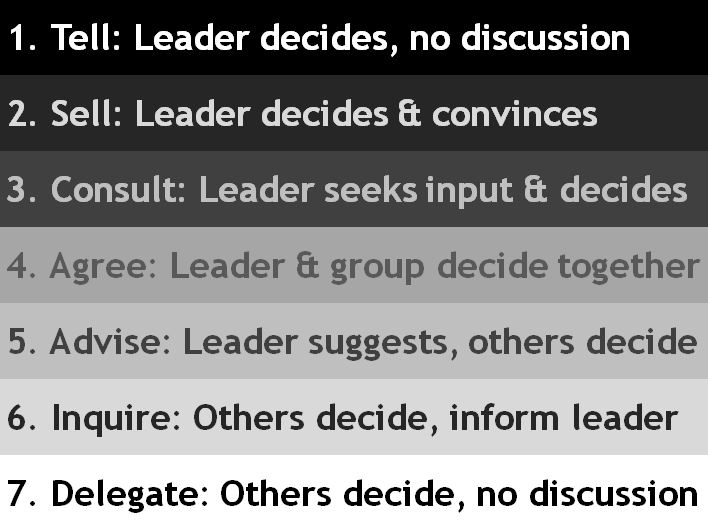 Jurgen Appelo is an innovative management thinker whose work I admire, and his 7 Levels of Delegation is a framework that I often recommend to clients to help them determine how to allocate authority and decision-making power between themselves and their team. As useful as this conceptual model can be, its effective implementation by a leader also requires skillful emotion management at multiple levels: internally, interpersonally, and across the organization as a whole.

Self-management and the leader’s desire for control

We typically prefer certainty—the more we know about the outcome of a situation in advance, the better we feel—and a consequence of this for leaders is that they can be reluctant to cede decision-making authority. Leaders may also believe that the perspective from their vantage point (or the expertise that helped them get there) allows them to make better decisions than others–and at times this is actually true, although certainly not always. And leaders tend to have a high need for power; this does not mean that they need to display (much less abuse) that power, but they care more about having impact and less about being liked than the typical person.

As a result, leaders often feel some discomfort or resistance when they initially consider alternatives to centralized decision-making. It’s simpler and more comforting to make the decisions themselves and instruct others to carry them out. This arrangement may work well at a small scale or in a venture’s early stages, but it breaks down once the organization begins to grow. The leader may still be the expert, but now they’re also the bottleneck. Or they’re no longer the expert, because they’re at a greater distance from the work, and their need for power is resulting in sub-optimal decisions. Or the leader’s desire for control is clashing with others’ desire for control, and employees feel disempowered and demotivated.

In order to make use of the model above and accurately determine how decisions should be made, the leader has to understand and address any discomfort or resistance that’s getting in the way. This requires self-awareness and the ability to sense and comprehend these emotions in the first place, a capacity that some leaders possess naturally but one that anyone can cultivate. Time for reflection, consistent rest, regular exercise, and a commitment to a mindfulness practice can all help. The key is slowing down sufficiently to question the reflexive response to a decision-making situation; this is particularly important when a leader feels a sense of urgency about a situation that might cloud their judgment and cause them to act impulsively.

It’s also important for a leader to commit to a process and stick with it, particularly when the outcome isn’t what they’d hoped—which can require a significant degree of self-regulation. If a leader originally opts to suggest a solution and let others decide (Advise) but then inserts themselves into the discussion to advocate for their preference (Agree), or begins to claw back decision-making authority (Consult), they’ll lose trust and demotivate their team.

Managing others and the leader’s ability to influence

As the model above makes clear, relinquishing decision-making authority doesn’t mean just delegating decisions to others and stepping away from the process. In many circumstances leaders will need to actively influence the members of their team by convincing them, soliciting their candid opinion, or engaging them in meaningful discussion. And a risk that leaders face in these situations is that their interpersonal behavior or positional power will inhibit others and prevent them from being open and direct if they disagree with the leader. The results can be even worse than sub-optimal decisions made independently by the leader; people don’t like following orders they disagree with, but they hate participating in a phony consensus-building process to rubber-stamp the leader’s original preference.

The key here for the leader is developing the ability to truly influence others, rather than merely extracting compliance. This entails a willingness to regulate their interpersonal behavior and avoid excessive reliance on authority or positional power. I’m not suggesting that leaders take a passive approach and simply hope a decision goes their way when they’ve chosen to cede some authority and involve others in the process. The best leaders are thoughtful students and practitioners of social psychology, employing such tools as Robert Cialdini’s principles of persuasion or Howard Gardner’s levers of influence to affect the outcome.

But effective use of these tools requires sensitivity to others’ emotions, particularly discomfort or resistance. Some leaders already possess a keen sense of what neuroscientist Richard Davidson calls “social intuition,” the ability to accurately detect others’ emotions through non-verbal behavior and other cues, but Davidson’s research makes clear that this skill can be cultivated and developed. Davidson focuses on the benefits of meditation, and in my experience as a coach the other practices I recommend above for self-management—regular reflection, rest, and exercise—also contribute to a leader’s ability to empathize with others and attune to their emotions. The key here is developing the capacity to discern when to push forward and advocate, and when to step back and make space—something very difficult to do when under stress.

Managing a culture and the leader’s influence at a distance

Organizational culture can be a nebulous concept, but one simple way to define it is “how people act when the leader is not in the room.” An organization’s culture has a significant impact not only on the effectiveness of a decision-making process, but also on how satisfied people feel with the outcome. Specifically, the culture’s behavioral norms determine the extent to which people are able to appropriately express and regulate emotions triggered by a decision-making process and its results. As noted above, decision-making situations often evoke strong emotions related to our preference for certainty and our desire for control and autonomy, and this is as true for everyone else in an organization as it is for the leader.

One of the primary purposes of the model under consideration here is freeing up a leader’s capacity by removing them from decision-making situations that don’t require their direct authority or would yield a better result without their involvement. This requires a leader to step away, figuratively and sometimes literally, and the absence of a leadership figure typically lowers the emotion regulation among the remaining participants. They will speak more freely, be less guarded, and express themselves more fully to make proposals or voice opposition. This shift is often helpful in a decision-making situation, and yet it can be counter-productive as well. A more candid discussion can turn into a fight; a broader consideration of available options can turn into paralysis. What’s needed is a set of norms governing behavior that help people achieve the level of emotional expression and regulation that’s optimal for decision-making in the absence of the leader.

Such norms are rarely explicit, in the form of clearly articulated and consciously understood guidelines for productive behavior. They’re usually implicit—a set of shared practices embedded in the surrounding culture that people sense and adopt without necessarily knowing that they’ve done so. And it’s at the level of organizational culture that leaders can create the conditions for more effective decision-making in their absence. Leaders aren’t solely responsible for a culture, nor do they establish norms single-handedly, but they have far more influence than any other individuals. The key steps here for a leader are: being intentional and deliberate about establishing and maintaining a culture that supports productive behavior; personally modelling that behavior with rigor and diligence; creating opportunities to make norms explicit by discussing them (and revising them when needed); and hiring (and firing) with an awareness of the importance of cultural fit.