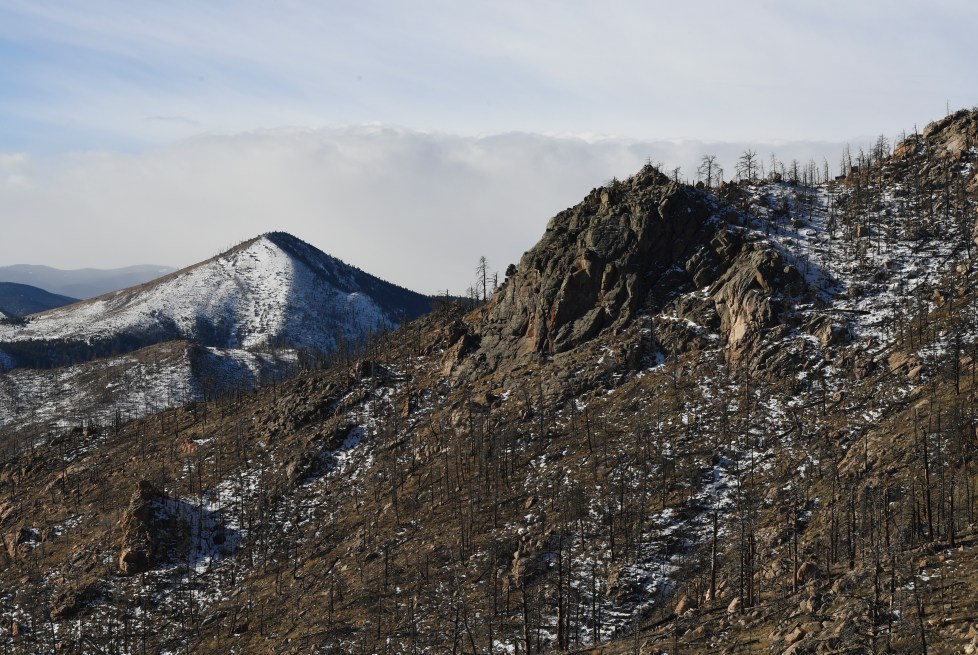 The devastation from the Fourmile Canyon Fire, years after in Sunshine Canyon west of Boulder, are still visible on Nov. 28, 2018 in Boulder. A recent climate change study shows that wildfires will be worse and more frequent because of climate change. Urban areas in Colorado continue to grow, and more of the population is moving into areas at high risk for wildfires.

Multiplying insects feast: Colorado’s forester last week said the state over two decades has lost a fifth of its forests to bugs, and a recent survey estimated one in 14 standing trees is dead.

These impacts of global warming, intensifying across Colorado and the West with costs in the billions, have happened precisely as scientists have been predicting. The latest National Climate Assessment — released by the Trump administration on the day after Thanksgiving — now drives home this scientific consensus that Colorado and its western neighbors will face worsening, potentially ruinous environmental upheaval as average temperatures that increased 2 degrees over the past 30 years keep rising.

World leaders at a United Nations-backed forum in Poland this week will rally nations to try to minimize ecological harm after 2050, and while American scientists will be there, the U.S. government isn’t participating.

Heading into 2019, tribal leaders, like local governments around the West, are scrambling to deal with the worsening impacts. For Utes, the most painful has been losing mountain springs used for sacred ceremonies due to decreasing snow and rain.

“People may have to consider changing their ways — how much water they use. They might have to think about how they’re going to sacrifice some things for the long run,” Knight said. “It’s up to the people. If they don’t want to do this, they had better be ready to accept the hard times.”

Yet Colorado continues to expedite the extraction of fossil fuels, which when burned worsen global warming, as the state clings to the economic benefits of jobs and tax revenue from the politically powerful oil and gas industry.

The 300 scientists who produced the National Climate Assessment, including several based along Colorado’s Front Range, point to recent ruinous climate events as evidence that global warming is affecting the United States as never before and threatening to disrupt lives coast to coast. Those impacts are pretty much locked in until 2050 due to past emissions that raised atmospheric carbon dioxide levels to 410 parts per million. What happens after 2050 depends on how fast humans reduce air pollution from burning fossil fuels, clearing forests and other human activities that further load the atmosphere with heat-trapping greenhouse gases.

“The message just gets louder and clearer as the years go by. We have got to deal with this problem,” said Colorado State University climate scientist Brad Udall, who co-authored portions of the climate assessment, which is produced every four years as mandated by Congress.

“We’ve had event after event after event over the last 10 years with climate change written all over them. We have another 80 years ahead of us. And with the current projected air emissions, the future is bleak,” Udall said. “…We need a sane and safe way to wean ourselves off fossil fuels over the next few decades, doing the least harm we can do to our economy but doing right by the environment. … We have to cease all greenhouse gas emissions as soon as practical.”

“States must lead the way, because the federal government has dropped the ball,” Polis wrote in an emailed response to questions from The Denver Post. “My administration will be looking carefully at various options to not only deal with the potential short- and long-term impacts from climate change, but how to do our part to combat the root causes of global climate change through bold, proactive policies to transition to renewable energy.

“Climate change is a blinking red light, and we have to act now or our children will end up suffering the consequences of inaction.”

A five-term congressman, Polis last week was clearing out his office in Washington, D.C., and mulling possibilities for a state leadership team adept at cross-departmental dialogue in dealing with rising temperatures.

“Climate change can touch every facet of people’s lives, and so there really isn’t a part of government that isn’t affected,” he said. “It’s preparing for floods and fires, but it’s also looking at how climate is affecting people’s health, how it’s affecting our economy now and is likely to affect it in the future. We will certainly be looking at how best to make sure we are taking a comprehensive approach to the issue and how our agencies can work together.

“Our ecology and many of our communities in the West are in already on a razor’s edge. Water is extremely scarce, and an expected population influx, coupled with longer, hotter summers and shorter, drier winters would threaten the region’s continued prosperity and quality of life.”

For the West, bigger wildfires and a lengthening “fire season” have combined with population growth and building in burn zones to destroy more people and property, as seen in California’s recent devastating wildfires and fierce burns in Colorado this summer. The record-low mountain snow in southern Colorado and higher temperatures accelerated a climate shift toward aridity that favors frequent ignition.

The cumulative forest area burned is increasing rapidly. And federal wildfire analysts calculated that the 24 million acres burned across the West between 1984 and 2015 was twice what would have burned had global warming caused by humans not happened.

Fires favored by climate change worsen the problem of more people building homes in forests and flammable former agricultural fields. Colorado state forester Mike Lester said in an interview that house-building and other urbanization in burn zones has left more than half of Colorado’s population — 2.9 million people — threatened by wildfire. That’s up nearly 50 percent from 2 million in 2012. State task force recommendations to limit construction in what insurers designate as the “wildland urban interface” mostly have been ignored by state lawmakers and property developers.

The more people move into burn zones, the harder it becomes to restore forest health because safety pressures to suppress fire set up bigger fires in the future. Forests need fires to regenerate.

“We need to let our forests evolve naturally,” Lester said. But population growth leading to urbanization of forests means “we’re always going to be suppressing fire.”

“We need to recognize the value of our Colorado forests, what they do for us. They provide water for 18 other states. They provide cleaner air, recreation, wildlife habitat. These are things a healthy forest does,” he said. “If our forests are not healthy, they do less of those things. This is a huge part of our way of life and well-being.”

Global warming is disrupting water flows, too, complicating the water supply necessary to allow more population growth in Colorado and other parts of the arid West. Rocky Mountain snowpack dipped to record low levels this year. Climate scientists have documented lower flows in rivers, including the Colorado River that farmers and urban developers tap as the main source serving 40 million people across seven states. Looming shortages compelled state officials to prepare emergency plans for curbing use of water from the government-built reservoirs and irrigation systems that enabled settlement of the West.

Beyond water conservation, some cities are pushing for construction of new and expanded reservoirs to try to store more water when rain falls.

The heat waves, with more days above 90 degrees throughout Colorado and the West — Denver alone now sees 50 to 70 days a year with 90-plus temperatures — drive more people to emergency rooms.

Higher temperatures force lifestyle changes, keeping people and pet animals indoors. Climate scientists say the rising heat hits the elderly hardest, along with children and low-income people who cannot afford to run air-conditioning systems. Low-wage workers, including some on construction and public works crews, often are given no choice but to toil outside when temperatures top 100 degrees.

A need for adaptation and action

Dealing with impacts falls mostly — and unavoidably — to local governments. Some cities, including Denver, Fort Collins and mountain resorts, are joining together to lobby for help in adaptation and coordinated international climate action to reduce emissions.

“The droughts, fires, threats to water supplies and heat waves — those things are all amplified and exacerbated by these increases in temperature,” said Gregg Garfin, a University of Arizona climatologist who co-authored parts of the national assessment focused on Colorado and southwestern states.

“Fossil fuel extraction is probably really good for the economy in the short term,” Garfin said. “If you look at the long term, then we have to take into account the effects of heat-trapping gases warming up the lower atmosphere. It is important to see the connections.”

Native Americans around the West are leading efforts to adapt, managing forests to increase resilience and restoring water flows where possible, said CSU climate researcher Shannon McNeeley, a national assessment co-author who has worked with tribes.

Natives cultures grasped how the natural environment, beyond economic potential, enabled survival of life in the West, McNeeley said.

“There are lessons we can learn from tribes. There’s more of an emphasis on viewing the natural world not as a commodity but as important relationships and interconnectedness — having value beyond just economic,” she said. “The environment has value for our health and for our well-being, beyond just financial. What has gotten us into trouble is prioritizing economic values. We prioritize that to our detriment.”