Inversion: The Crucial Thinking Skill Nobody Ever Taught You

The ancient Stoic philosophers like Marcus Aurelius, Seneca, and Epictetus regularly conducted an exercise known as a premeditatio malorum, which translates to a “premeditation of evils.”1

The goal of this exercise was to envision the negative things that could happen in life. For example, the Stoics would imagine what it would be like to lose their job and become homeless or to suffer an injury and become paralyzed or to have their reputation ruined and lose their status in society.

The Stoics believed that by imagining the worst case scenario ahead of time, they could overcome their fears of negative experiences and make better plans to prevent them. While most people were focused on how they could achieve success, the Stoics also considered how they would manage failure. What would things look like if everything went wrong tomorrow? And what does this tell us about how we should prepare today?

This way of thinking, in which you consider the opposite of what you want, is known as inversion. When I first learned of it, I didn’t realize how powerful it could be. As I have studied it more, I have begun to realize that inversion is a rare and crucial skill that nearly all great thinkers use to their advantage. 2 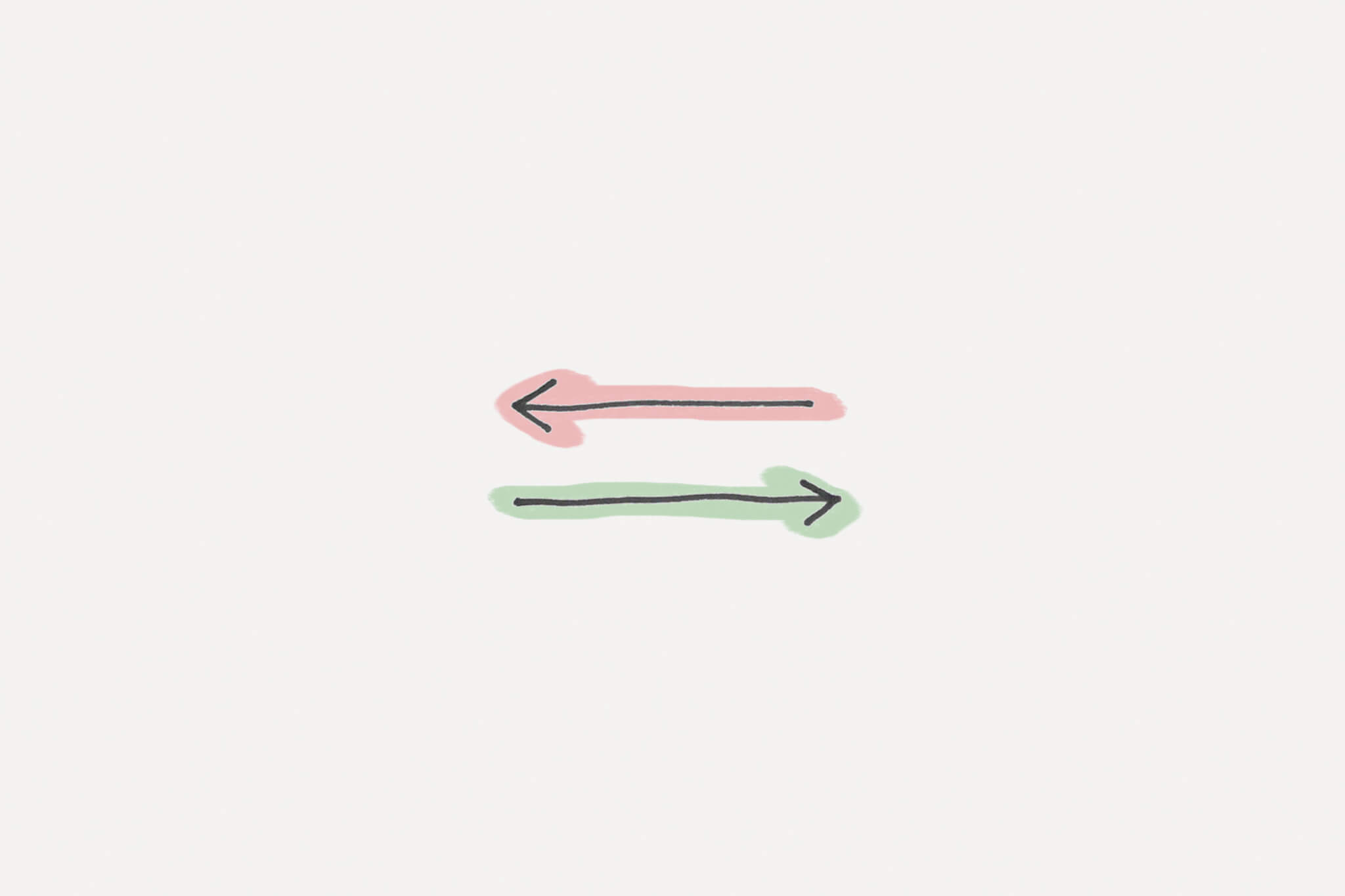 The German mathematician Carl Jacobi made a number of important contributions to different scientific fields during his career. In particular, he was known for his ability to solve hard problems by following a strategy of man muss immer umkehren or, loosely translated, “invert, always invert.” 3

Jacobi believed that one of the best ways to clarify your thinking was to restate math problems in inverse form. He would write down the opposite of the problem he was trying to solve and found that the solution often came to him more easily.

Inversion is a powerful thinking tool because it puts a spotlight on errors and roadblocks that are not obvious at first glance. What if the opposite was true? What if I focused on a different side of this situation? Instead of asking how to do something, ask how to not do it.

Great thinkers, icons, and innovators think forward and backward. Occasionally, they drive their brain in reverse.

Great thinkers, icons, and innovators think forward and backward. They consider the opposite side of things. Occasionally, they drive their brain in reverse. This way of thinking can reveal compelling opportunities for innovation.

One of the biggest musical shifts in the last several decades came from Nirvana, a band that legitimized a whole new genre of music—alternative rock—and whose Nevermind album is memorialized in the Library of Congress as one of the most “culturally, historically or aesthetically important” sound recordings of the 20th century. 4

Nirvana turned the conventions of mainstream rock and pop music completely upside down. Where hair metal bands like Poison and Def Leppard spent millions to produce and promote each record, Nirvana recorded Nevermind for $65,000. Where hair metal was flashy, Nirvana was stripped-down and raw. 5

Inversion is often at the core of great art. At any given time there is a status quo in society and the artists and innovators who stand out are often the ones who overturn the standard in a compelling way.

Great art breaks the previous rules. It is an inversion of what came before. In a way, the secret to unconventional thinking is just inverting the status quo.

This strategy works equally well for other creative pursuits like writing. Many great headlines and titles use the power of inversion to up-end common assumptions. As a personal example, two of my more popular articles, “Forget About Setting Goals” and “Motivation is Overvalued”, take common notions and turn them on their head.

This type of inverse logic can be extended to many areas of life. For example, ambitious young people are often focused on how to achieve success. But billionaire investor Charlie Munger encourages them to consider the inverse of success instead.

Avoiding mistakes is an under-appreciated way to improve. In most jobs, you can enjoy some degree of success simply by being proactive and reliable—even if you are not particularly smart, fast, or talented in a given area. Sometimes it is more important to consider why people fail in life than why they succeed.

The Benefits of Thinking Forward and Backward

Inversion can be particularly useful in the workplace.

Leaders can ask themselves, “What would someone do each day if they were a terrible manager?” Good leaders would likely avoid those things.

Similarly, if innovation is a core piece of your business model you can ask, “How could we make this company less innovative?” Eliminating those barriers and obstacles might help creative ideas arise more quickly.

And every marketing department wants to attract new business, but it might be useful to ask, “What would alienate our core customer?” A different point of view can reveal surprising insights.

You can learn just as much from identifying what doesn’t work as you can from spotting what does. What are the mistakes, errors, and flubs that you want to avoid? Inversion is not about finding good advice, but rather about finding anti-advice. It teaches you what to avoid.

Here are some more ways to utilize inversion in work and life:

One of my favorite applications of inversion is known as a Failure Premortem. It is like a Premeditation of Evils for the modern day company.7

Imagine the most important goal or project you are working on right now. Now fast forward six months and assume the project or goal has failed.

Tell the story of how it happened. What went wrong? What mistakes did you make? How did it fail? In other words, think of your main goal and ask yourself, “What could cause this to go horribly wrong?”

This strategy is sometimes called the “kill the company” exercise in organizations because the goal is to spell out the exact ways the company could fail. Just like a Premeditation of Evils, the idea is to identify challenges and points of failure so you can develop a plan to prevent them ahead of time.

Most people want to get more done in less time. Applying inversion to productivity you could ask, “What if I wanted to decrease my focus? How do I end up distracted?” The answer to that question may help you discover interruptions you can eliminate to free up more time and energy each day.

This strategy is not only effective, but often safer than chasing success. For example, some people take drugs or mental stimulants in an effort to increase their productivity. These methods might work, but you also run the risk of possible side effects.

Meanwhile, there is very little danger is leaving your phone in another room, blocking social media websites, or unplugging your television. Both strategies deal with the same problem, but inversion allows you to attack it from a different angle and with less risk.

Marie Kondo, author of the blockbuster best-seller The Life-Changing Magic of Tidying Up, uses inversion to help people declutter their homes. Her famous line is, “We should be choosing what we want to keep, not what we want to get rid of.”

In other words, the default should be to give anything away that does not “spark joy” in your life. This shift in mindset inverts decluttering by focusing on what you want to keep rather than what you want to discard.

What behaviors might ruin a marriage? Lack of trust. Not respecting the other person. Not letting each person have time to be an individual. Spending all of your time on your kids and not investing in your relationship together. Not having open communication about money and spending habits. Inverting a good marriage can show you how to avoid a bad one.

Everyone wants to make more money. But what if you inverted the problem? How could you destroy your financial health?

Spending more than you earn is a proven path to financial failure. It doesn’t matter how much money you have, the math will never work out for you over time. Similarly, accumulating debt is a hair-on-fire emergency to be resolved as quickly as possible. And gradually creeping into unchecked shopping and spending habits can lead to self-inflicted financial stress.

Before you worry too much about how to make more money make sure you have figured out how to not lose money. If you can manage to avoid these problems, you’ll be far ahead of many folks and save yourself a lot of pain and anguish along the way.

Inversion is counterintuitive. It is not obvious to spend time thinking about the opposite of what you want.

And yet inversion is a key tool of many great thinkers. Stoic practitioners visualize negative outcomes. Groundbreaking artists invert the status quo. Effective leaders avoid the mistakes that prevent success just as much as they chase the skills that accelerate it.

Inversion can be particularly useful for challenging your own beliefs. It forces you to treat your decisions like a court of law. In court, the jury has to listen to both sides of the argument before making up their mind. Inversion helps you do something similar. What if the evidence disconfirmed what you believe? What if you tried to destroy the views that you cherish? Inversion prevents you from making up your mind after your first conclusion. It is a way to counteract the gravitational pull of confirmation bias.

Inversion is an essential skill for leading a logical and rational life. It allows you to step outside your normal patterns of thought and see situations from a different angle. Whatever problem you are facing, always consider the opposite side of things.