10 years ago today, I posted my first blog post on this site. That’s pretty much forever on the internet, and I think it probably also makes me old. A lot has changed in the last decade, both on this website, and for me personally (and the world at large). Let’s have a quick look shall we?

When I first created this website, I was using a little tool called blosxom to manage the blog. It was a tiny little Perl script that pulled the contents of your blog from text files on your filesystem. Pretty awesome, nerdy stuff. Dented Reality also looked something like this, pretty hot huh? 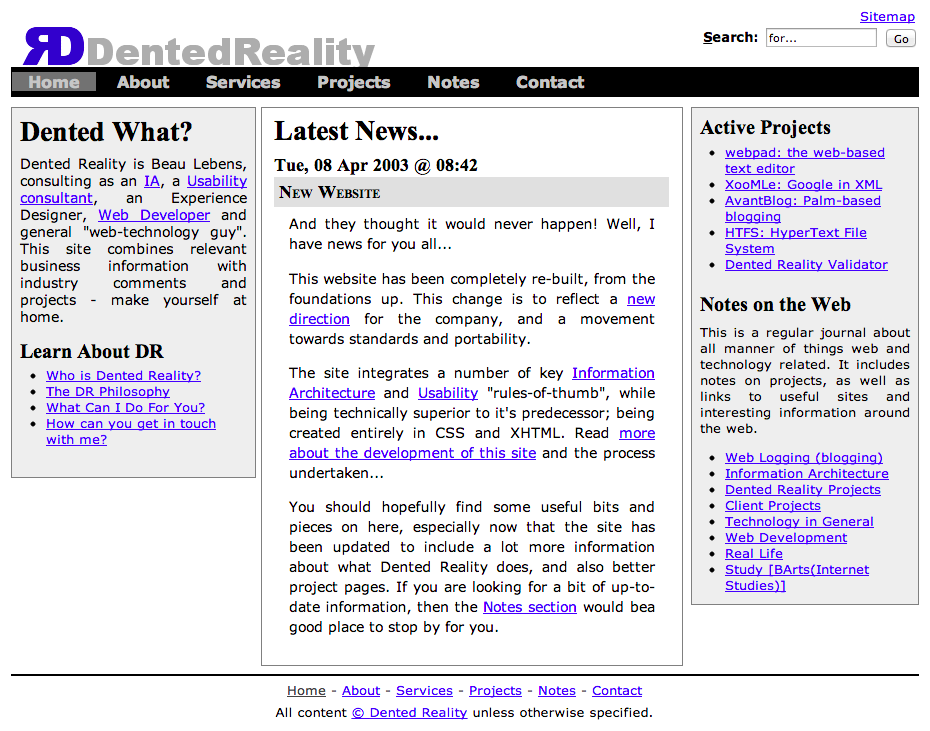 Lots and lots of hand-coding. I was really into Information Architecture and search systems and stuff like that, so my site kind of reflected that. It had a fluid layout and scaled reasonably well to the screens of the day. I’m surprised (and pleased) to see that the version in archive.org even mostly loads and works in a modern browser. My site stayed looking like that for a LONG time. I poked around a bit with the content, and posted on the blog here and there, but wasn’t really that into the whole file-system-based blog thing (as neat an idea as it was, it just didn’t fit wonderfully with how I worked).

Somewhere between Oct 18 and Dec 13 in 2008, I finally launched a complete overhaul of my site, which was then powered by WordPress. 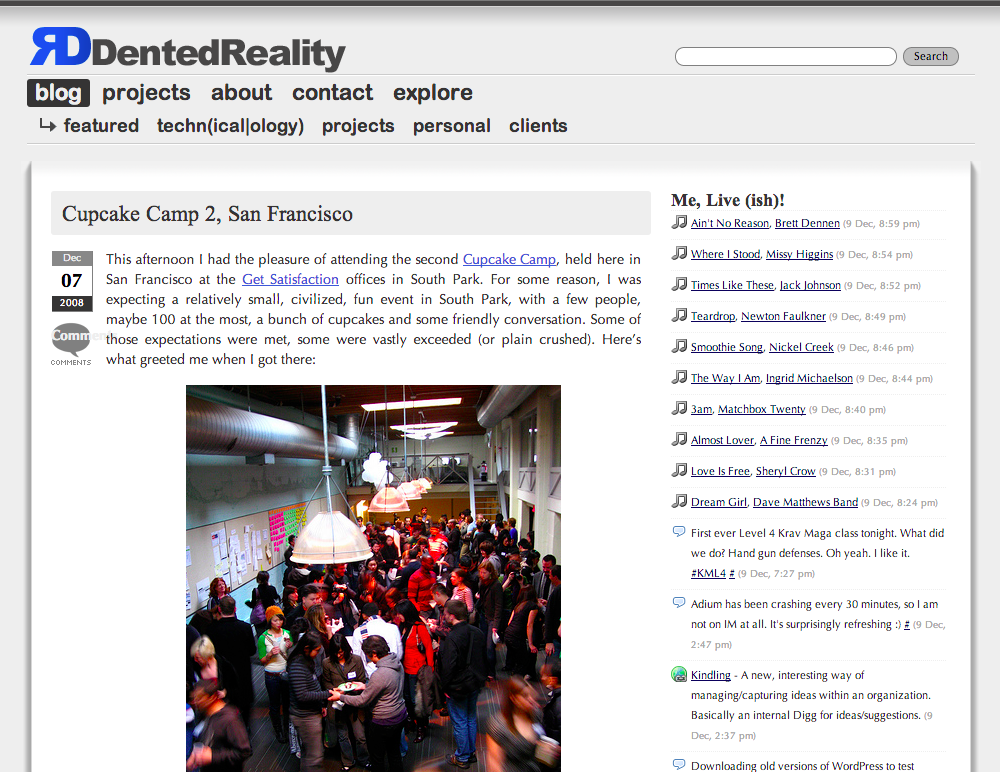 I started blogging more, and even posted about the site update itself. This was a (my first) handmade WordPress theme, and included a few neat things like the combined feed on the right (music from last.fm, tweets and links from delicious), some dynamic page menus and loading posts based on tags onto the project pages.

A lot has changed since then… except for the theme 🙂 It really must be time for a new one, and it happens that I’m currently working on a new theme that will eventually power this site. It’s just not quite ready for prime time yet. Under the hood, a bunch of plugins have come and gone, and this site has even been merged into a multi-site install that’s used to power a few other WordPress’ that I manage. On the surface though, Dented Reality looks pretty similar to how it did almost 5 years ago. I promise I’ll get my new theme launched before I hit the 5 year mark (and it’s a significantly different theme)!

At a hosting level, dentedreality.com.au has been hosted at phpwebhosting.com, DreamHost and now MediaTemple over that time. I think that’s all. I’m pretty happy with MediaTemple for now, their Dedicated Virtual plan is serving this site (and a bunch of others) just fine. In keeping with the short-attention-span culture, I also got my hands on http://dntd.cc which redirects to this site at the root level, and functions as a URL-shortener for all entries on this site as well (it’s also really handy to have a one-letter email address on for when you have to hand-write one somewhere).

While my site was ticking away, a bunch of big changes have happened in my life as well (some more related to this website than others).

Through my work at Automattic, I now spend most days working on something at least tangentially-WordPress related. It’s pretty awesome, and seems fitting that this site continues to run on WordPress (I self-host, rather than run on WordPress.com). I still experiment and try out new things here (and run “trunk”), and as mentioned I’m hoping to soon launch a pretty major overhaul of the site, which will include a new theme and a bunch of new content. As for some other things I’ve been up to online in that time:

and a bunch comments, posts, images, etc around the place. That’s a lot of digital stuff. You’ll be seeing a lot more of that around here once I get the updates in place.

I wonder what the next decade will hold?