Once you’ve got yourself a Wakemate ($59.99) and a Fitbit ($99.95), you’re ready to get started. There isn’t much initial setup with the Wakemate, since it just interacts with your phone. You have to pair it like any other device but that’s about it. For the Fitbit, you’ll need to actually install an app on your computer (I did it on a Mac, running OS X Lion). The app that is installed handles syncing your data when you’re in range, or when you plug the device in to recharge.

I prefer the way that you use the Fitbit for tracking sleep. It has some intelligence built into it so that when you record an “activity” overnight, it takes that as your sleep. To do that, you just hold down the (single) button on the device for 2 seconds. When you wake up, you need to hold the button down to stop your “activity” again, which I sometimes forget to do.

With the Wakemate, I need to load the app on my iPhone, make sure Bluetooth is on (sometimes I turn it off to save battery), turn on the wristband (I constantly have to turn it off because the battery life doesn’t seem very good), make sure it’s connected, then hit the button to start a sleep session (and make sure it initiates properly, because I’ve had problems with that as well. Once your alarm goes off, you need to wake up enough to enter your code to unlock your phone, then hit the “I’m Awake” button. Sometimes this can be tough if you’re half asleep 😉

Between the two devices, I think Fitbit wins here for a couple of reasons:

Both devices give you a website where you can review your data. Both devices also now have native iPhone applications which include access to your data (current and historical). The Fitbit app is a lot more full-featured, but that’s because Fitbit in general is targeting a lot more than just sleep. Here is a side-by-side comparison of data collected from each device, on the same night, wearing them on the same arm: 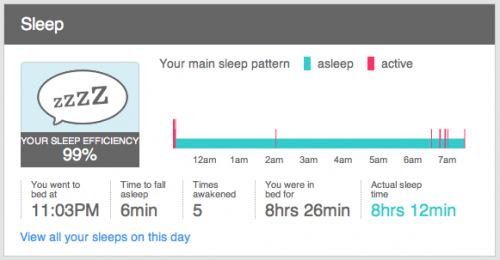 A big point to note here is that the 2 devices are fundamentally intended for different purposes, they just happen to cross over a certain amount. The Fitbit fundamentally measures steps (through motion) and will give you a distance and calorie approximation as well. The design of the device allows you to clip it just about anywhere on your both or clothes. The Wakemate tracks your sleep through the same mechanism, but does not give any measurement other than “movement” while sleeping. Since it is a wristband, your options on how to wear it are pretty limited. The Fitbit also allows you to view your current (for today) data right on the device (via an integrated OLED display) which is  a really nice touch. Being able to check how many steps I’ve done in a day is a great motivator to get up and do some more.

Overall, I think the Fitbit is a better purchase, even though it’s nearly twice as much. Since it is a more general-purpose device, and since you will be more likely to wear it all the time, you’ll end up with a lot more, valuable information. With a longer battery life, simpler daily use and a more refined appearance in general, it’s just a better product.

Now that I’ve tried these, I’m really curious to see what the Jawbone UP is like…