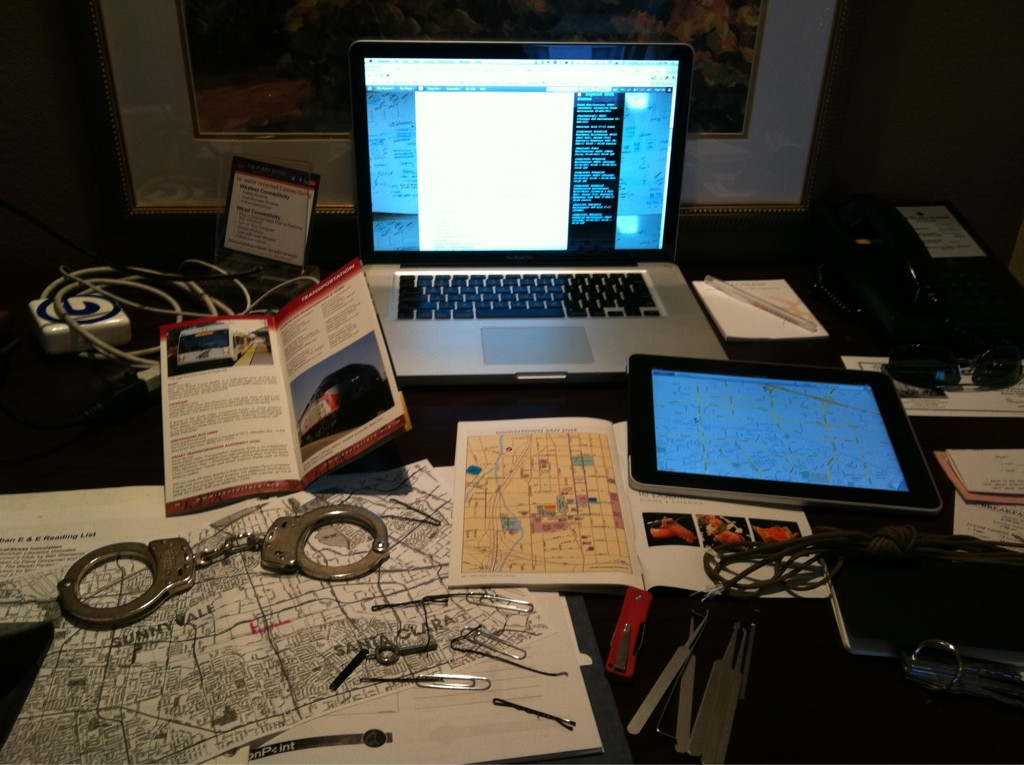 A few weeks ago I attended a 3-day course titled “Scout Urban Escape & Evasion“, delivered by onPoint Tactical. The idea of it was to learn how to get around in a hostile  urban environment, assuming you were being pursued. That pursuit might be active or not, and might be post- or pre- apprehension of some sort (e.g. kidnapping). Sounds like fun, right?

So what did we learn? Here’s a quick summary of the material we covered during the 2 days of class-work:

We spent a lot of classroom time learning how to pick handcuffs and locks which was fun. Once you know how to pick handcuffs they are ridiculously easy. Picking door/pad-locks is a bit harder but also surprisingly easy. The highlight of the course was the full-day field exercise on day three (Saturday), which went something like this:

On the Friday night  we cached anything we thought we might need on Saturday. Whatever you hid had to be put somewhere that someone wouldn’t find it, otherwise you’d have to do without it. It was suggested that we’d need lock picks and some cash would be a good idea. Disguises optional, but might help evading our pursuers. We hid some smaller pieces that contributed to disguising us (hat, glasses, bag, coffee mug) along with lock picks, cash, a map, a small bag, a frisbee and a few other things we didn’t end up using. On Saturday morning we arrived at the hotel in Santa Clara at 8:30am and were whisked off to a room upstairs. Inside, the furniture was pushed out of the way and the lights were off. A single lamp shone in the corner and there was a guy there in a balaclava and ski goggles, dressed all in black. After a bit of back and forth, he pushed us against the wall, frisked us (taking anything he found that we weren’t supposed to have) and then threw us on the couch. We were then handcuffed to each other, hooded, and our hoods were duct taped on.

At this point, the “kidnappers” all left the room and we jumped into action. My hood was relatively easy to remove, so I got it off and then went to work on the handcuffs. I actually had 2 different picks and a shim on me that had escaped my cursory pat-down, so I grabbed one from my sock and undid our cuffs. We picked up some instructions from under our feet that would guide us through the day. Once we were out of the room, we headed for the stairs to make our escape. Right away, we ran into a couple of “Hunters” (the people who would be pursuing us all day). We dropped down a couple of floors and bolted across the hotel to the other set of stairs. There we headed back up stairs to shake them (which apparently worked) and eventually made our way downstairs and right out the front. We had wanted to get down the service elevator but every floor we passed had someone working there.

From the hotel, we made for our caches and picked up our stuff. Then we started zig-zagging along back streets and improvising weapons along the way (mostly bottles and concrete chunks at this point). Our instructions had informed us that we were to rendezvous at a set location with a “partisan” who would give us some information if we convinced them we were who we said we were, and that it would be a good idea for them to help us. Once we got that information, we were headed off to a specific intersection down towards San José. We headed off on foot towards transit options (bus), again sticking to back streets.

Along the way we came across a soccer ball which became a part of our disguise. We ended up kicking that thing for a large portion of the day. It helped to set our pace and kept our focus off the fact that people were supposed to be hunting us. Our path took us along an abandoned railway line for a little while, which was a gold-mine of improvised weapons: steel hooks, broken bottles, strips of metal, you name it. Eventually we got down to a major road where we could hop a bus headed in the direction we needed to be going. That got us close, but then we realized we were setting ourselves up to go through a choke point, so we hopped another bus to get past there. That took us past where we needed to be, so we doubled back through some running/hiking trails and hit our target intersection from a different angle. 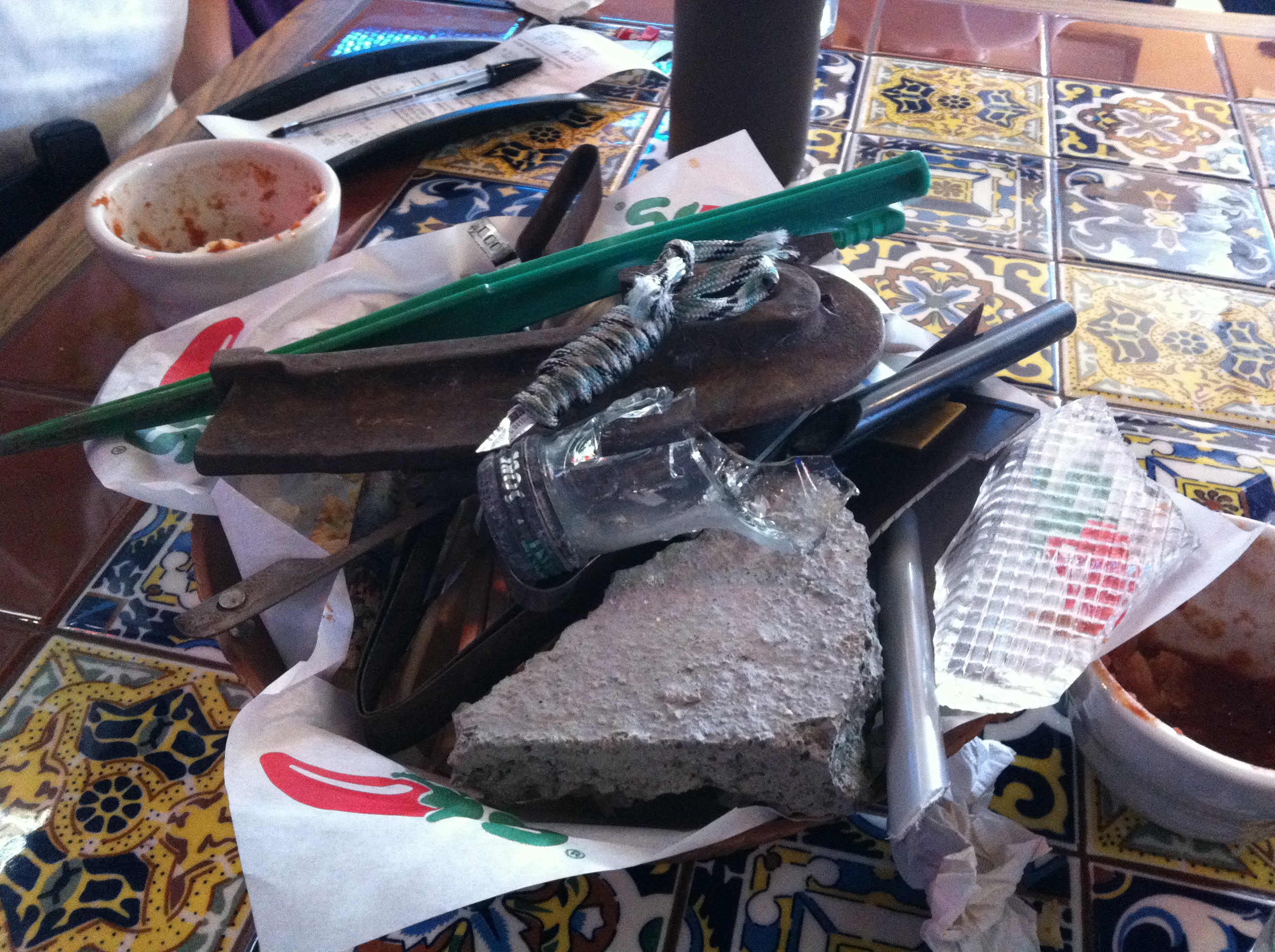 Here we had to pick a lock before we could get some more information that would guide us for the rest of the day. Once that was done we were headed off towards downtown San José, which is where we were to be spending the rest of the day. Once we got there, we were to stay within a bounded area and never stay in one place for more than 30 minutes. We had a list of tasks to accomplish that kept us pretty busy: things like finding a working pay phone, acquiring $2 from someone (legally) and location outdoor-accessible potable water. Once all of that was done, we had to meet at a final meet point (at 4:30pm) for a debrief and beer.

It was a long day, and according to RunKeeper (which I had running for most of the day; we had to have our cellphones with us for safety reasons, but we’re allowed to use them to help us), we covered almost 18 miles (including the bus trip). We managed to avoid capture for the whole day, and in fact the only run-in we had with the Hunters was in the morning. One of them said that they had seen me towards the end of the day, but couldn’t get to me to capture me. We finished all of our tasks and got to the final meeting point roughly on time (although we had to get a cab for the last bit to get there on time, because we hadn’t realized how far out our final destination was).

All in all it was a great course that was a lot of fun for someone with no real training in this sort of thing but a solid interest. I feel like it gave me a better understanding of things in an urban setting, and definitely gave me a few new skills to practice (especially picking hand-cuffs/locks!). I was actually expecting to be roughed up more/treated a little worse during the field exercise, and assumed that we’d get caught, or at least chased. I don’t know whether to put that down to being too tough and good at this stuff, or that they were soft on us and weren’t great at covering all the ground they had to cover as Hunters. I’ll probably go with the second set of options 🙂 Either way, this is a good set of skills to add to my hopefully-never-need-to-use-this-but-it’s-fun-to-know-anyway list.