Although far from being a “tree-hugging hippie“, I guess I’ve got a few opinions when it comes to the food system here in the US. I won’t bother going into any detail, but needless to say that the way food is produced here is not good for us or the world we live in, and needs to change some time soon. Through a bit of an interest in the general area of “alternative” food sources and processes, I came across the SF Underground Farmer’s Market (thanks Timoni!), which ended up leading me to forageSF. This was a whole new experience in food, let me tell you why…

forageSF is an interesting organization, founded by Iso Rabins, “with the mission to connect Bay Area dwellers with the wild food that is all around them”. The general idea is that there are all sorts of edible things growing around us, which in days gone by were a cornerstone of our dietary intake, but which are now dismissed as weeds, pests or just “not fit to eat”. forageSF aims to educate people and reintroduce them to this forgotten food system.

To this end, they hold regular dinners for groups of (in our case) around 50 people, comprised of completely foraged ingredients. At first glance, this might sound like a bad thing. It’s not. We had an incredible 8-course meal with complete strangers, who were good friends by the end of the event. I snapped some (horrible, because of the iPhone’s poor performance in low light) photos of most courses below for you to drool over.

The meal was hosted at a duplex, with half of the guests in each condo. During the meal, Iso would come around and talk to us about what we were about to (or had just) eat, about where he (or someone else) found the ingredients and what made them significant to the area. It was really a fun trip to hear about how all of these ingredients had come directly from nature (no cultivation allowed, that’s the point) and onto our plate. Our own little corner of the country had very directly provided this meal for us, in a way that most other meals you eat in the world (and especially the US) can’t hope to compete with.

So enough of my rambling — on with the food! 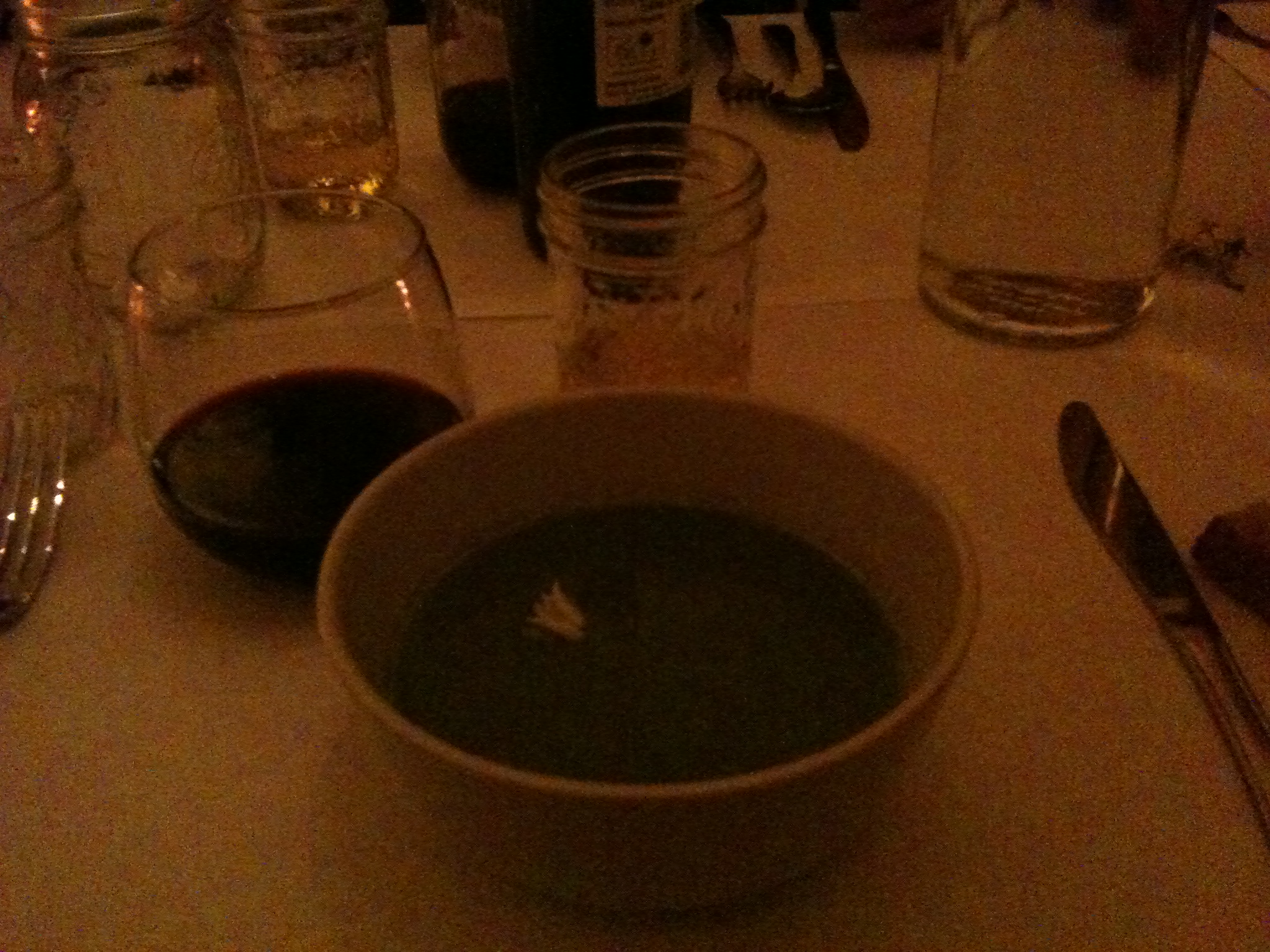 You can’t really see in the picture, but this soup was a vibrant green color, with a small white flower in it. The soup itself was delicious, but the flower was a real treat. It had a strong garlic/onion taste to it and really tipped the flavor of the soup. 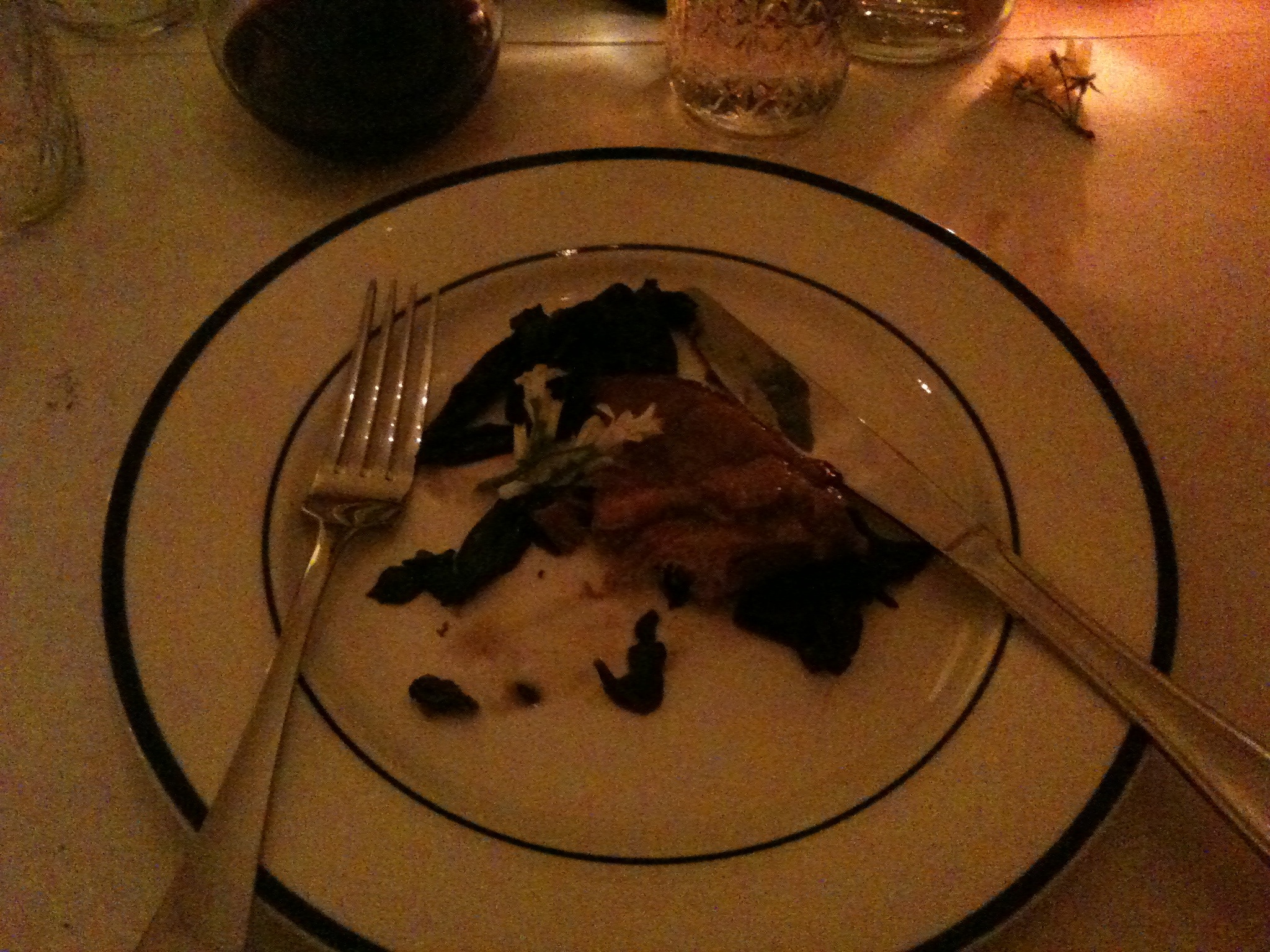 OMG. This was was incredible. The boar was so tender and moist, while the greens were tangy and gave some balance to the meat.

Somehow I missed out on taking a photo of the next dish, “Salad of miners lettuce, sweet jems and pickled beets in a tart oxalis viniagrette”. It was a relatively simple salad, but a tasty one regardless. I actually ended up spotting (and eating!) a bunch of miner’s lettuce the next day on my camping trip (post coming soon). 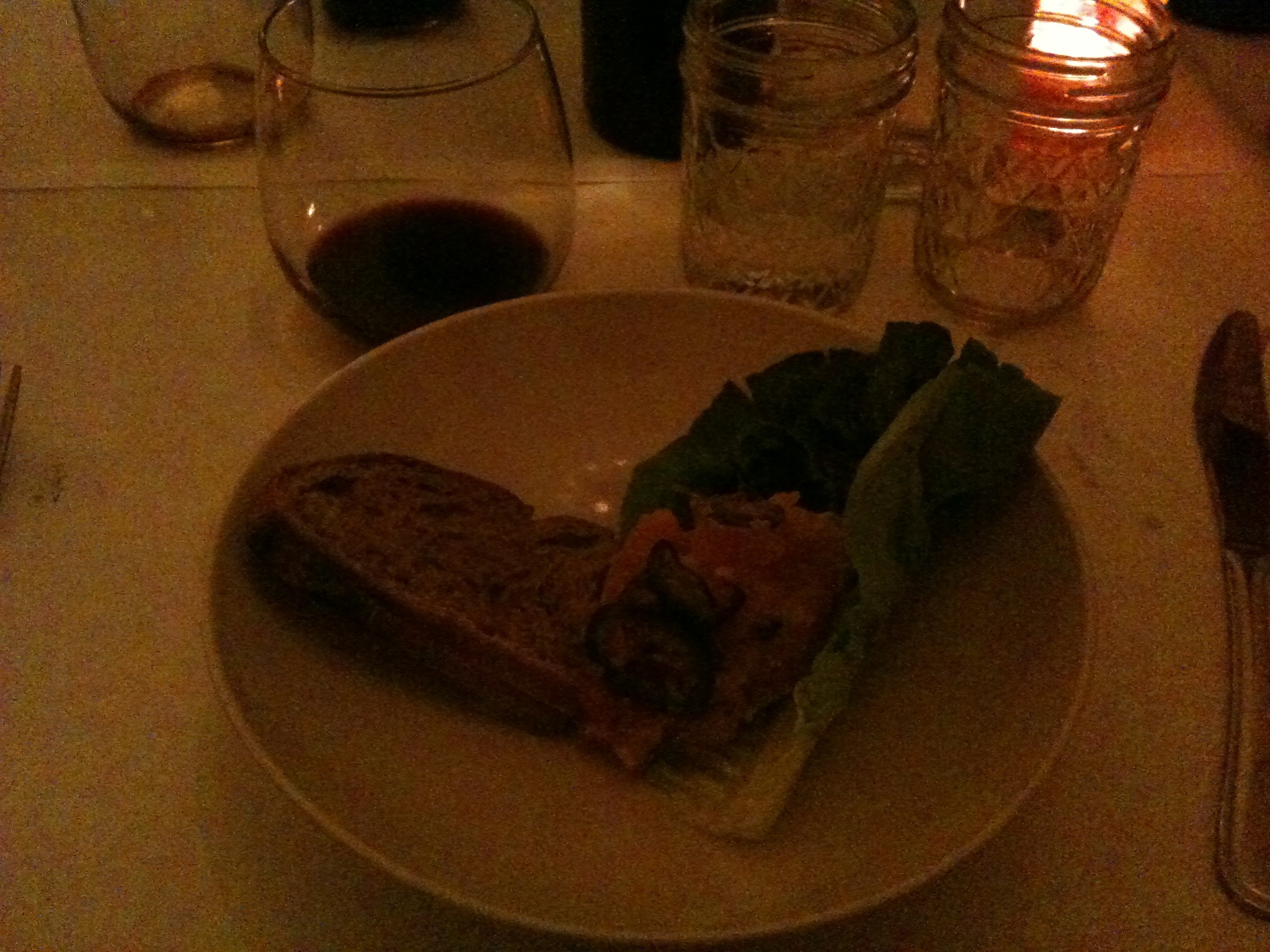 The albacore was super fresh, and the fried jalapenos really kicked it off. It loved the crunch that the jalapenos provided, and they were just the right level of hotness not to overwhelm everything else. 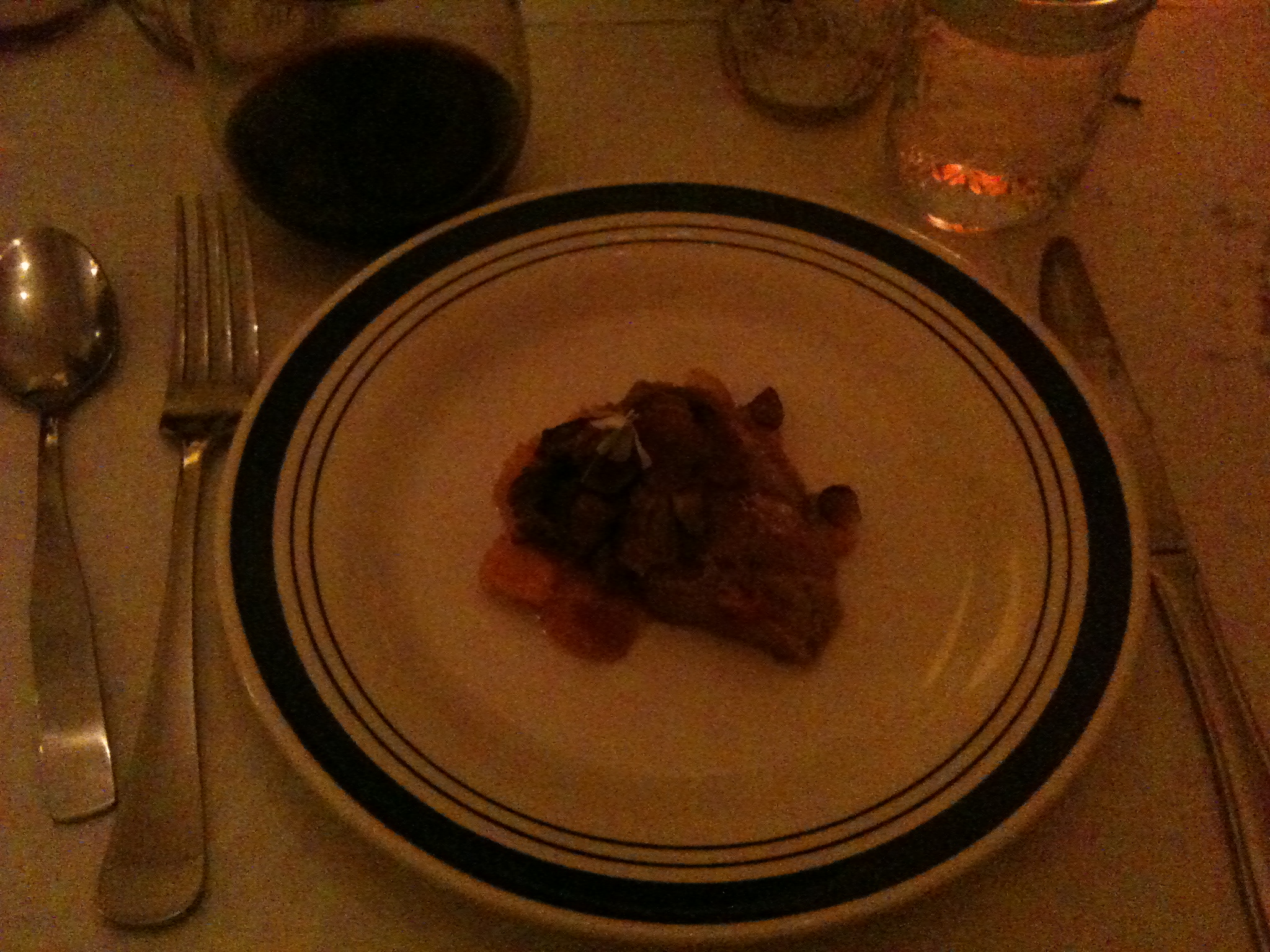 The boar was a little dry in this dish, but still delicious. The citrus mostarda on the other hand? Wow. Tangy. Crazy tangy. A really interesting dish which sounds kind of at odds with itself but was thoroughly tasty. 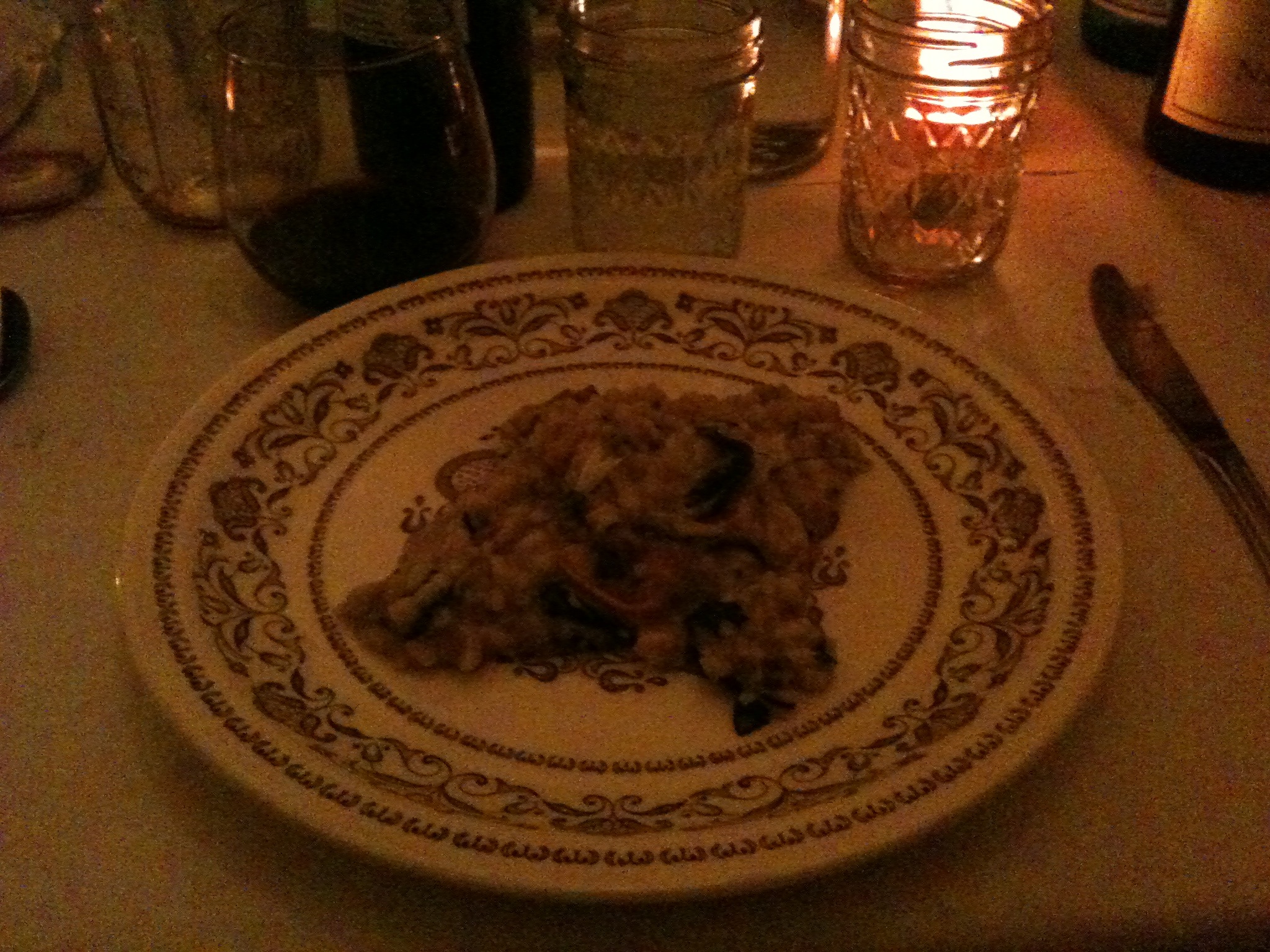 Risotto is easy to cook badly. This was definitely not cooked badly 🙂 I’m not sure if the rice itself was foraged (I doubt it), but the black trumpets were, and they provided a nice light flavor to the dish. 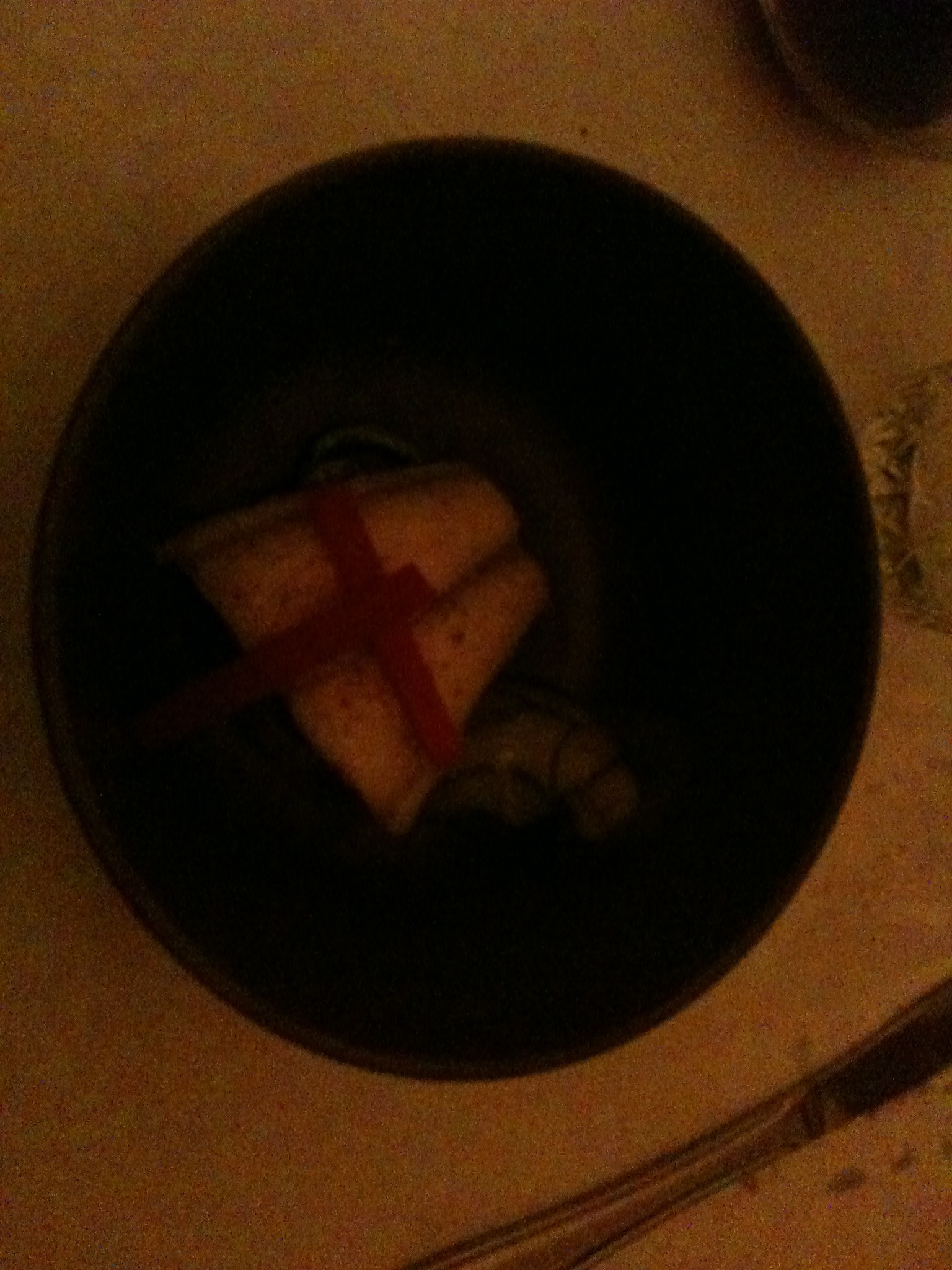 Robin doesn’t like fish too much, so I ended up eating 2 plates of this, but I enjoyed them both. The code itself was a little soft perhaps, but the miso marinate was delicious and the fiddleheads (baby fern heads) were an interesting new thing for me.

By the end of the night, my phone’s battery was completely run down, so I couldn’t get a photo of the incredible dessert. “Candy cap ice cream with huckleberry compote”. Wow. The huckleberry compote on its own was awesome. Tart, tasty and thick. The icecream was incredible though. Vanilla base with all sorts of deliciousness in there, I think I could have eaten a bucket of this.

All in all, we had an amazing time. After we got over our initial nervousness (a random meal of “stuff found around the place” at a strangers house, paid for in cash???) and started chatting with people, we made some new friends, enjoyed some delicious food and got a light education to boot. I would definitely do this again, assuming it doesn’t become too popular to be able to get a seat at the table!

UPDATE: Some more photos from the “official photographer” over on the forageSF blog post (hosted on WordPress.com, w00t!).