In a few days, I leave to go to Santiago, Chile for 40 days. It’s not a vacation. It’s not a work trip. If anything, it’s an experiment. It’s a test of the concept of truly remote working and of living a more portable (nomadic?) lifestyle. Hopefully, it’s a test of the future.

My apologies in advance, I have a feeling this post is going to ramble a bit…

I’ve worked in web development full time for almost 10 years now, and for a long time there has been a bit of a fantasy in the industry that I’m sure you’ve heard of. Working from a sun lounge on the beach, on the other side of the world, connected via wifi on your laptop. How many people do you know who actually do that? Not many, right? Me neither. The reality is that most technology companies are actually still based around the idea of a central office, and even if they’re not, there are probably some reservations against the idea of their employees hopping around the place and working from a laptop.

About 2 years ago, I read Tim Ferris’ best-seller, “The 4-Hour Workweek

” and a lot of it really clicked with me. Particularly a lot of his talk about living a more portable and unfettered lifestyle. This was something I’d been thinking about since I was a kid, when my dream lifestyle (work with me here) was to jet around from hotel to hotel, working on exciting technology projects around the world. Well, why couldn’t I do that? The internet is pretty prevalent these days. My laptop is actually my primary work machine now, and has been for the past 3 or 4 years, most of my work is development-based stuff that doesn’t require face to face interaction and, final piece of the puzzle, I now work for a company which is completely distributed.

Since starting at Automattic, I’ve spent time working at home, from our office at Pier 38, from cafes, conventions and meetups, from Los Angeles, Manila and New York. If I hadn’t bothered to tell my colleagues where I was at the time, no one would know or care. How far can we take that? Can I go to Chile for 40 days and just carry on like normal? I say yes. And so does my awesome boss, Matt (luckily!). He was actually happy for me to be taking advantage of the flexibility the Automattic “work environment” affords us, and hinted that he might come and visit while I was down there.

So why Chile? Well, it’s not completely random. I actually made a shortlist of places that I wanted to go to, using some specific indicators to narrow the list down:

I put together a list of 5 places and then actually jumped on Elance and contracted someone to research each place for me. It cost around $150 to get a pretty thorough dossier of information on 5 different cities, which I think was OK. I could have gotten most of it myself from Wikipedia and the CIA Factbook, but it was an interesting process regardless. From those documents, The choice was narrowed down to Buenos Aires and Santiago. I could have easily gone either way, but luckily knew 2 different people who had been to both places, and both of them recommended Santiago. The main reason from both was that Buenos Aires is an amazing city and is very beautiful, but it’s almost European it’s so “cosmopolitan”, whereas Santiago is a bit more “authentically South American” and has everything you could ask for. Done and done. Santiago it is. 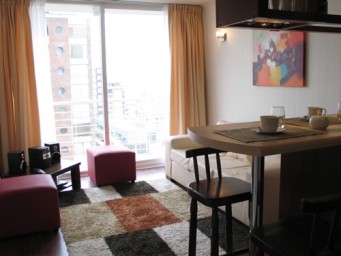 And so, I jumped online, grabbed a ticket from LAN and an apartment through ContactChile.cl, and in 4 days, I set off for 5 weeks in South America. I’ll be taking a few days off while I’m there, but the majority of it I’ll be working from either the apartment I rented, or nearby cafes with wifi. If this goes well, I’m hoping to be able to do more of the same in the future, but I’ll keep you posted on that.